You are now in the place where we share poems of well-known poets, often from the list “Best Poems” and “Best Poets”. Due to copyright we only present the poems of those poets who passed away some time ago and therefore, you will not find poems of contemporary poets here. We invite you to familiarise yourself with the poems about Woman available here and we hope you will enjoy reading. The poems about Woman found here you can easily add to the free ecards from our site, and then send ecards to friends. Best Woman poems for you.

So far as our story approaches the end,
Which do you pity the most of us three?
My friend, or the mistress of my friend
With her wanton eyes, or me?

My friend was already too good to lose,
And seemed in the way of improvement yet,
When she crossed his path with her hunting-noose
And over him drew her net....

That fawn-skin-dappled hair of hers,
And the blue eye
Dear and dewy,
And that infantine fresh air of hers!

Close your eyes, my love, let me make you blind;
They have taught you to see
Only a mean arithmetic on the face of things,
A cunning algebra in the faces of men,
And God like geometry
Completing his circles, and working cleverly.

I'll kiss you over the eyes till I kiss you blind;
If I canif any one could.
Then perhaps in the dark you'll have got what you want to find.
You've discovered so many bits, with your clever eyes,
And I'm a kaleidoscope
That you shake and shake, and yet it won't come to your mind.
Now stop carping at me.But God, how I hate you!
Do you fear I shall swindle you?
Do you think if you take me as I am, that that will abate you
Somehow?so sad, so intrinsic, so spiritual, yet so cautious, you
Must have me all in your will and your consciousness
I hate you.

A Strange Gentlewoman Passing By His Window

As I out of a casement sent
Mine eyes as wand'ring as my thought,
Upon no certayne object bent,
But only what occasion brought,
A sight surpriz'd my hart at last,
Nor knewe I well what made it burne;
Amazement held me then so fast
I had no leasure to discerne.

Sure 'twas a Mortall, but her name,
Or happy parentage or place,
Or (that which did mee most inflame)
I cannot tell her very Face:
No; 'twere prophane to think I could,
And I should pitch my thoughts too lowe
If ever sett my love I should
On that which Art or Words can shewe....

If any man drew near
When I was young,
I thought, 'He holds her dear,'
And shook with hate and fear.
But O! 'twas bitter wrong
If he could pass her by
With an indifferent eye.

Whereon I wrote and wrought,
And now, being grey,
I dream that I have brought
To such a pitch my thought
That coming time can say,
'He shadowed in a glass
What thing her body was.'...

A Woman Waits for Me

A woman waits for meshe contains all, nothing is lacking,
Yet all were lacking, if sex were lacking, or if the moisture of the right man were
lacking.

Sex contains all,
Bodies, Souls, meanings, proofs, purities, delicacies, results, promulgations,
Songs, commands, health, pride, the maternal mystery, the seminal milk;
All hopes, benefactions, bestowals,
All the passions, loves, beauties, delights of the earth,
All the governments, judges, gods, followd persons of the earth,
These are containd in sex, as parts of itself, and justifications of itself.

Love bade me hope, and I obeyed;
Phyllis continued still unkind:
Then you may e'en despair, he said,
In vain I strive to change her mind.

Honour's got in, and keeps her heart,
Durst he but venture once abroad,
In my own right I'd take your part,
And show myself the mightier God.

This huffing Honour domineers
In breasts alone where he has place:
But if true generous Love appears,
The hector dares not show his face....

Let's contend no more, Love,
Strive nor weep:
All be as before, Love,
Only sleep!

What so wild as words are?
I and thou
In debate, as birds are,
Hawk on bough!...

She has laughed as softly as if she sighed,
She has counted six, and over,
Of a purse well filled, and a heart well tried -
Oh, each a worthy lover!
They "give her time"; for her soul must slip
Where the world has set the grooving;
She will lie to none with her fair red lip:
But love seeks truer loving.
She trembles her fan in a sweetness dumb,
As her thoughts were beyond recalling;
With a glance for one, and a glance for some,
From her eyelids rising and falling;
Speaks common words with a blushful air,
Hears bold words, unreproving;
But her silence says - what she never will swear -
And love seeks better loving.
Go, lady! lean to the night-guitar,... 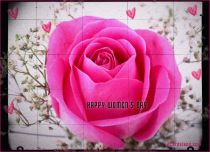 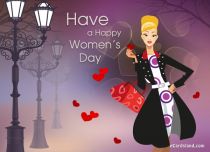 Have a Happy Women's Day 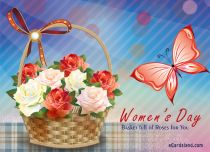 Basket full of Roses for You

Close To My Heart 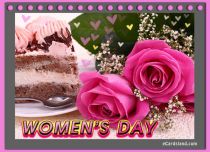 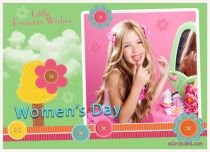 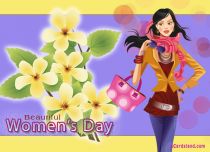 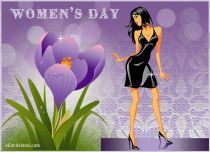 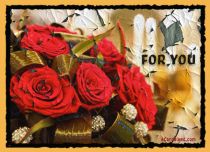 Don't you have an idea for a text for an ecard? Familiarise yourself with our database of ready poems, which you can add to e-card effortlessly. We offer a selection of poems of well-known poets, but also poems of less famous authors. Choosing poems about Woman for the particular ecard you will have the pleasure of reading and browsing poems, because beautiful poetry is always inspiring and moving, affecting your senses and soul. By the way, perhaps you will be inspired, too, and write your own poem, which you can later share with other users of Cardsland site. Choose poems about Woman and send free eCards to friends.